Being able to query and manipulate data effectively is a valuable skill for any software engineer to have in their toolbelt. In this post, we're going to take a look at Window Functions and the functionality they provide. Although this post is going to focus on using window functions with T-SQL, it's important to note that window functions are part of the ANSI SQL standard and are available in other SQL database implementations.

What Are Window Functions?

Here is a quick example demonstrating the difference between window functions and aggregate functions. While the syntax of the window function may not be familiar yet, I think the explanation and query result will be helpful in understanding key differences.

This first query is a straightforward aggregate query that groups on the CustomerID column and provides an aggregate sum of TotalDue for each group of CustomerIDs. 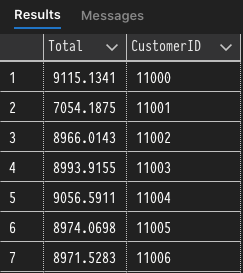 The second query is very similar to the previous, but it includes the ROW_NUMBER() function that effectively numbers each row in the "window" defined by the OVER clause. It's key to note here that ROW_NUMBER is not constrained by the GROUP BY aggregation because it is evaluated afterward, so each row in the entire result set is numbered individually. 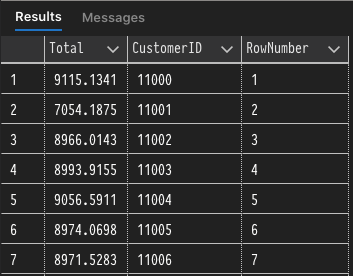 Now that we've seen an example of a window function let's jump into the syntax used to define them in queries.

If you look at the documentation page for clauses involved in window functions it may seem a little overwhelming with all of the different options available. Personally, I think that the majority of uses cases for window functions can be broken down into four parts.

We will look at the different kinds of window functions in the next section. First, we'll be placing our focus on the syntax and purpose of the OVER clause when used with PARTITION BY and ORDER BY.

The general syntax when using the OVER clause is relatively simple. We use OVER in conjunction with a function like ROW_NUMBER() to partition, order, and perform calculations against windows of data.

In the example below we can use the ROW_NUMBER function to apply a number to each row in the partitions defined by PARTITION BY CustomerId and ordered with ORDER BY OrderDate. As we can see from the result set below the query, the ROW_NUMBER function is applied to each partition of CustomerIDs and it starts over with each new partition (CustomerId). The rows within each partition are ordered by the OrderDate, which is defined within the OVER clause and not the overall query.

Now that we've gone over the common syntax for window functions covered let's take a look at the different types of Window Functions and what they can be used for.

So far we've looked at the purpose and general syntax used with window functions, but we haven't talked specifically about the different kinds of window functions and what they can be used for. In the next three sections, we'll be looking at Ranking, Aggregate, and Analytic functions which can all be applied as window functions. First up is ranking functions.

The RANK function will rank each row in a result set partition with a numeric value. RANK is very similar to ROW_NUMBER except that RANK will return the same number for ties. When ranking the RANK function will take into account both the PARTITION BY and ORDER BY column values. If we want to rank the entire result set instead of individual partitions, we can exclude the PARTITION BY clause.

Run the following code to test out the RANK function. As you'll see from the result set rows with Id 2 and 3 have the same quantity, which leads to an equal rank. An important thing to note is that gap is left in the rankings where 3 should be leaving the ordering to be 1,2,2,4,.... 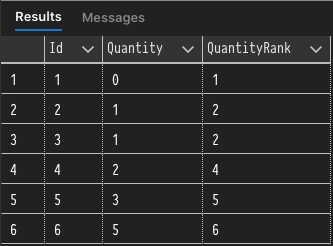 DENSE_RANK is very similar to RANK, except that it does not leave a gap in the rankings. So if we use our previous example code, but call DENSE_RANKinstead we'll notice that the resulting QuantityRank is 1,2,2,3,4.... 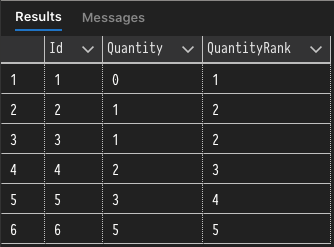 NTILE, the last of the ranking functions to cover, is a little different in comparison to other ranking functions in that it is used to distribute rows in an ordered partition to different buckets. In the previous examples, the ORDER BY clause was optional, but with NTILE it is required in order to properly distribute rows within a partition. The best example I can think of for this function is a grading system that split results into quartiles (4 buckets). In the example below the grades will be distributed into 4 buckets (quartiles) based on the descending order of student grades. 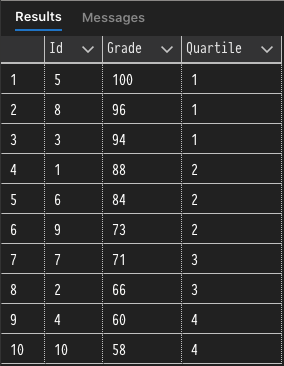 Let's continue with the student grading example by introducing a StudentId column and multiple test scores for each student. We will then use the aggregate functions with OVER to return the MIN, MAX, AVG, and COUNT for each student. 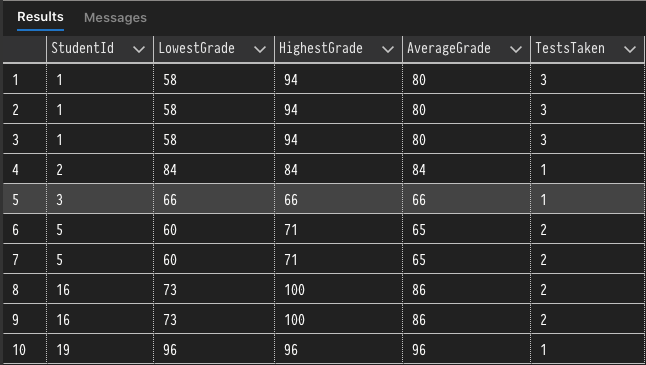 While this could have also been accomplished by grouping, it's good to always have other options when grouping may not be the best option for the task at hand.

I don't plan on going through all of the analytic functions because they are relatively similar in functionality and self-explanatory, but I do think it would be worth showing an example for the LAG function. For the full list of analytic functions, check out the documentation here.

I find LAG to be an interesting function (LEAD is a very similar) because it actually looks at the previous row(s) to calculate a value. When using LAG we must use ORDER BY in our OVER clause and it has the following parameters.

When using the LAG function the first row of a partition will use the default value because there are no previous rows. For example, we can look at multiple grades for a student and see trends in how grades change over time. You'll notice that we use the Grade as the default value to avoid skewing the difference column when a partition begins. 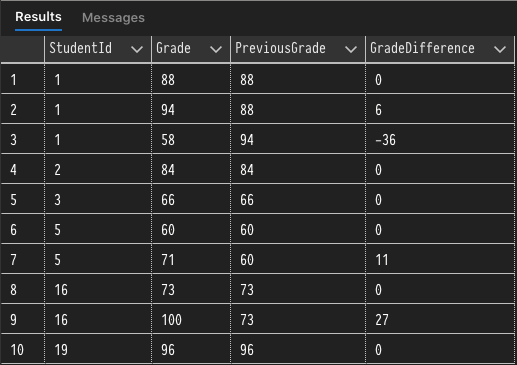 Window functions are a really great feature in SQL and can provide very useful functionality when used at the right time. This post covered the basics and some of the general features, but there is so much more to learn. Check out the resources below for even more information about window functions!