Debugging C# in Neovim with nvim-dap

As a software developer debugging skills are invaluable. Over the years debugging tools have evolved to become an integral part of the development toolbox. In this post, we are going to look at how we can configure a debugging experience for .NET code in Neovim. Let's dive in!

Over the past few months, Neovim has become my go-to editor for all of my free time/side project coding needs. There have certainly been hurdles to overcome, but I enjoy the experience and coding environment that Neovim provides. As I've continued to expand my Neovim understanding and environment configuration, I've been looking for more and more ways to integrate Neovim into my .NET development workflow. I've written a couple of posts about .NET development in Neovim. One for general environment setup and another for Roslyn/.editorconfig integration. If you don't have your local development environment for Neovim setup yet, I would highly recommend checking out those posts. With all of that in place, we should be ready to configure Neovim for the ability to run our application with a debugger.

First, I think it's valuable to talk about the plugin that makes this all possible. The only plugin that we need to install for debugging in Neovim is nvim-dap. I would highly recommend reading more about nvim-dap in the GitHub repo, but at a very high-level nvim-dap is a debug adapter protocol client implementation for Neovim. Nvim-dap provides the ability to run an application with a debugger, add breakpoints, step through code, inspect scopes, and much more. Neovim 0.8.0 is the recommended version for using nvim-dap, but the nightly build and 0.7.2 are also supported. Nvim-dap is a generic implementation than can plug into almost any debugger that follows the standard protocol. For this post, we are going to be focused on the use of nvim-dap for debugging .NET applications. Let's start with a list of steps that need we'll be going through.

Nvim-dap can be installed just like any other Neovim plugin. I use Packer for plugin management so the install command looks like this. For the full installation, documentation check out the README here

We now have nvim-dap installed, but to make it useful for .NET development we need to install a debug adapter. In this case, the adapter is netcoredbg. For installation, we can go to the releases page and download the latest release. At the time of writing the latest release is 2.2.0-947.

We now have nvim-dap and netcoredbg installed and are ready to configure nvim-dap to use netcoredbg. This step is very straightforward. The following code can be added to a lua block in init.vim or directly in a lua file that is part of the Neovim runtime path. I think the only dynamic piece of the code is to make sure the command field is referencing the correct location for the netcoredbg executable.

With all of this done we now have a functioning debugging adapter for .NET Core applications in Neovim. With that being said the developer experience in the current state is a little clunky. We haven't set up any keymaps to perform actions like starting the debugger and setting breakpoints. We will go through that next, but if you'd like to give debugging a shot you should be able to run :lua require'dap'.continue(), which will prompt for the path to the .dll file to debug. Before going any further let's set up the keymaps for nvim-dap.

As you can see from the remapping <leader>b is used to toggle breakpoints and F5 is used to launch the debugger. In the screenshot below you can see there is a breakpoint denoted by the B in the lefthand gutter as well as the path to EplStats.dll in the status bar at the bottom of the window.

The dapui plugin is installed like any other Neovim plugin, but it is dependent on nvim-dap being installed as well.

I think the default setup for dapui is a great starting point for a familiar debugging UI in Neovim with a couple of caveats. In the configuration below there are a few lines at the end that make sure the dapui windows are open and closed when the debugger is launched and terminated. The following snippet can be added to the init.lua, a lua section in init.vim, or another lua file in the runtime path.

With this configuration in place, when the debugger launches we should see a UI that looks something like this. The default dapui configuration is equipped with call stacks, local scopes, console output, and active breakpoints. 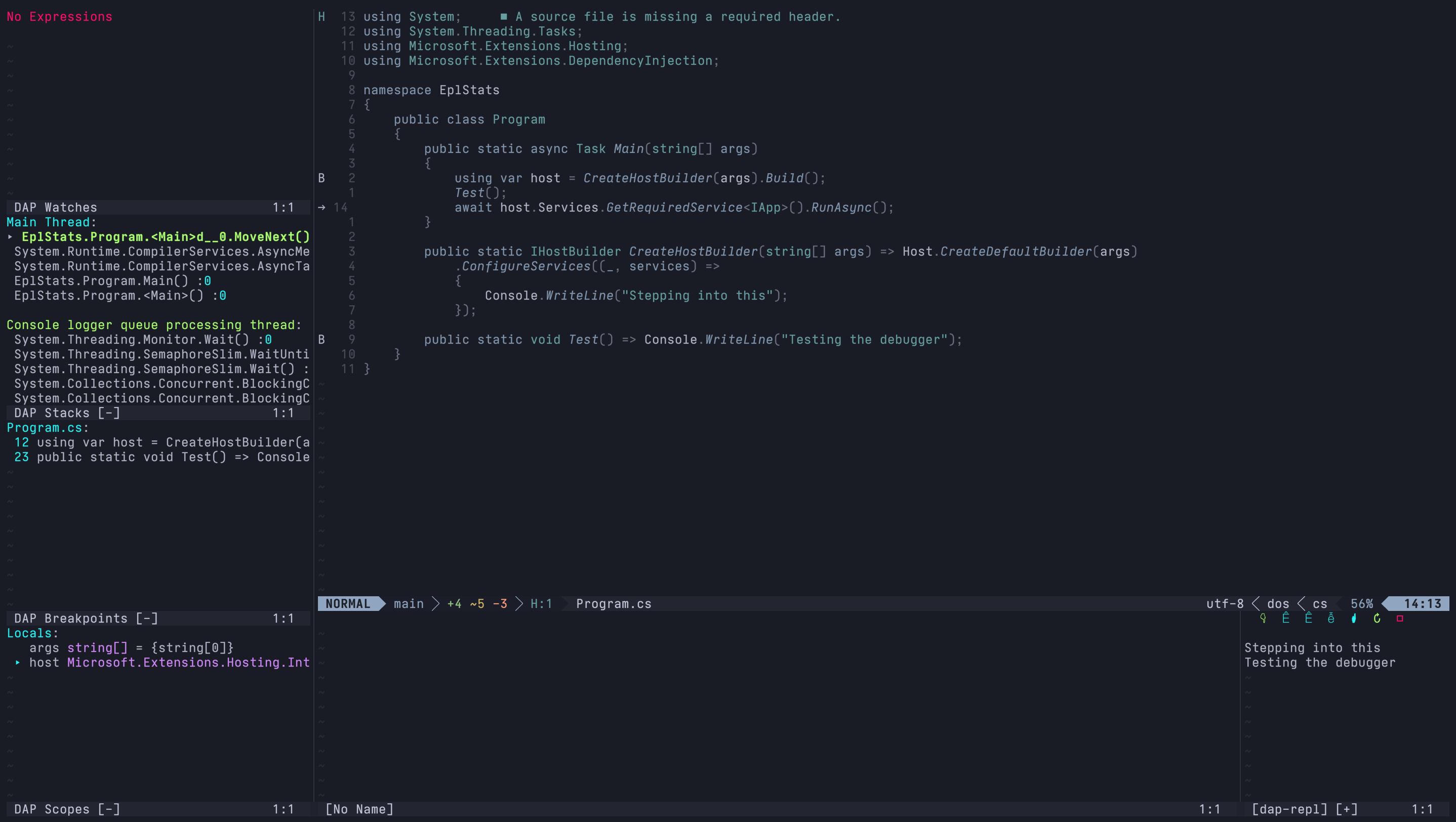 If you've made it to this point, congratulations! Configuring a debugging environment in this way can be a long process and it's not always straightforward. In the gif below you'll see the debugging experience in action. Notice the arrow in the lefthand gutter, which indicates the current line that the debugger is paused. As you can see from the button press hints, F10 is used to step over and F11 is used to step inside of methods.

This post is a quick and simple introduction to this debugging configuration, but I would highly recommend checking out the documentation for nvim-dap and dapui for more advanced configuration and customization.